Full Load of King - Elevator to the Gallows [csr064] 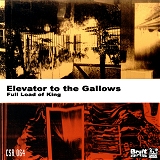 audio
Full Load of King - Elevator to the Gallows [csr064]

by
Full Load of King

Elevator was originally released on cassette in 1996, and was lovingly re-mastered in 2005 to bring forth all of its glory. Each original cassette side was performed as a live mix with the basic noise pieces and segues being mixed on the spot with tape loops and other live instruments directly to DAT.

Elevator to the Gallows was the first installment in Full Load of Kings Noise Trilogy to be recorded, but is the last to be released on Comfort Stand.

(The Noise Trilogy titles have been released in reverse order. In other words, Alphabet of Desire was the last to be created but the first to be released, and FLOP was the second created and the second released. Confused yet?)

All three releases in the Noise Trilogy were developed over an eight-year time span while FLOK was busy sprouting other noises.

Those will be forthcoming shortly